Over time your turf areas can become extremely compact. This is very common after an event is hosted on the lawn, from kids playing, sports fields and even weekly mowing. During this process, a thick and dense layer of thatch (dead grass stems and roots) takes over at the turf’s surface, and your lawn can be starved of oxygen and water that is needed down at the roots.

Core aeration is a method of mechanically creating holes into the turf to allow moisture, oxygen and nutrients to penetrate the soil. There are other methods out there such as spike aeration (holes are stabbed into the turf) but mechanically removing the cores places less pressure on the turf and soil because it removes the actual core of soil, turf and root.

Core aeration deposits the core plug onto the surface of your lawn, which breaks down over the course of 1-3 weeks on average with proper watering. As the plugs break down they provide great nutrition for the existing soil along with increasing the strength of the turf’s roots beneath the surface. 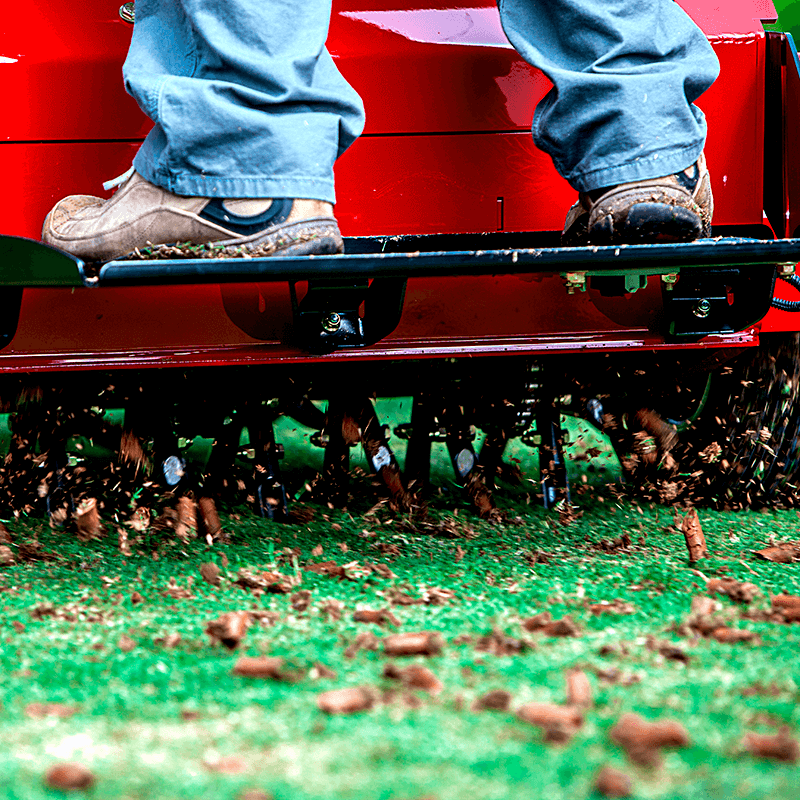 What Are The Benefits To Core Aerating Your Lawn?

Oxygenating your lawn through aeration improves soil composition and maximizes turf grass rooting. Most importantly it makes the lawn less susceptible to damage from weeds, insects, drought and disease over the long term.
It also:

Scheduling our aeration services in late summer/early fall from August 15th through September 30th is an excellent practice for an established lawn to relieve compaction and improve its solidity.

Get A Quote
Call Now